Well, I wasn’t assaulted or shouted down.

Last night I spoke at the Yale Political Union in defense of a resolution supporting the secession of American states.

I’ve never been part of anything quite like it. The format is as follows: I speak for 20-30 minutes, I take questions for another 15, and then I’m seated on stage while student representatives of the various Yale political parties (the Party of the Right, the Federalist Party, the Conservative Party, the Independent Party, the Liberal Party, the Party of the Left, and one other I can’t recall right now) speak for or against the resolution.

At the end, the speaker is allowed the final word, as he responds to the various students.

Now you know how tough I’ve been on American universities and the antics that go on there.

But I’ll say this: my event at the Yale Political Union was, by contrast, one of the most intellectually fulfilling events I can recall in my entire career.

It began with dinner with a number of students active in the organization. It couldn’t have been more pleasant. There I was with people who ranged from complete agreement with me to the most radical disagreement, and the evening was filled with laughter and engaging discussion.

In other words, the kind of thing I would have thought impossible these days.

The event itself was outstanding. My opening statement was meant to make people think seriously about an issue I’m sure most of them had never before considered. On that front, I succeeded.

The student responses were virtually all informed and worth hearing, even when I disagreed with them. They were all delivered with decorum and respect.

My closing statement, which I hope I’ll be able to get video of for you, was my favorite part. There I roasted (in good fun) the students who had criticized my position. I had them in uproarious laughter.

At the end, the resolution in favor of state secession carried the day by a 2-1 margin. 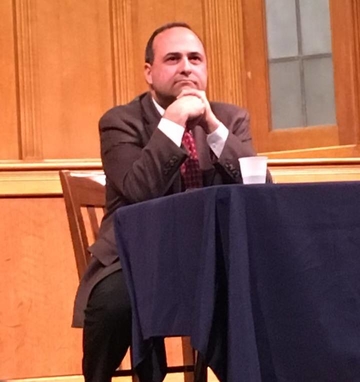 (That’s me listening to student speeches for and against my position.)

Thanks to all my listeners who attended. It was great to see you all. And thanks for opening these emails so you know about my events!

This Monday, April 10, we’re celebrating the five-year anniversary of Liberty Classroom (my dashboard, on-the-go university for libertarians, where you can learn the history and economics they kept from you) with a deal on the Master, lifetime membership that I won’t be repeating for at least another five years.

The price will be slashed by $200 — and on top of that, as an offer-sweetener I’ll include signed, personalized copies of FOUR of my books: The Politically Incorrect Guide to American History, Who Killed the Constitution?, Real Dissent, and 33 Questions About American History You’re Not Supposed to Ask.

Put it on your calendar — Monday! — or watch this space. (Or hop on my legendary email list and be reminded, and get a free eBook in the process.)

P.S. Want to vacation with me? This year’s Contra Cruise is going to be amazing, with libertarian foreign-policy expert Scott Horton and others joining us as special guests. Get the details, and watch our hysterical four-minute video montage of last year’s cruise: http://www.ContraCruise.com