Bernie Sanders, who just made headlines for buying his third house for $600,000, refused to comment when a Univision reporter asked for his thoughts on Venezuela.

For a short time, Venezuela — now a miserable #176 out of 178 countries in the Economic Freedom of the World Index — was all the rage among leftist journalists and academics.

Columnist David Sirota wrote an article for Salon called “Hugo Chavez’s Economic Miracle,” in which he chided free-marketeers for their dogmatism, and for refusing to acknowledge the clear merits of Venezuela’s system.

Via Economic Policy Journal, here’s a depiction of the GDP figures in Venezuela and South Korea (for reference). 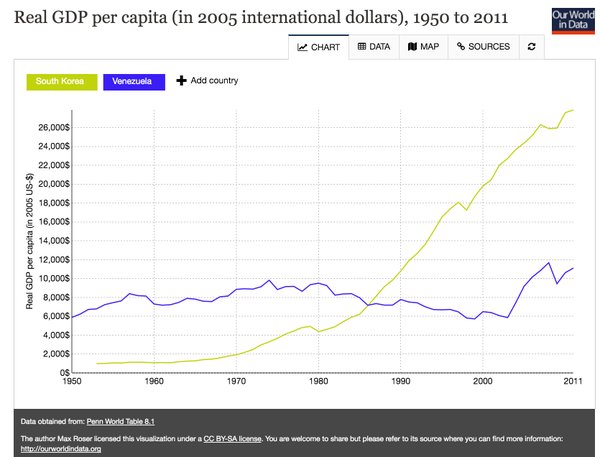 Oh, but we support the Scandinavian model of socialism, say your friends.

Later this month I’ll be speaking on the show to Sweden’s Dr. Nima Sanandaji, author of the forthcoming (August 23) book Debunking Utopia: Exposing the Myth of Nordic Socialism.

That will be fun.

Meanwhile, my friend Bob Murphy, the brilliant economist, just finished his course on the history of economic thought for my Liberty Classroom. He covers Karl Marx, the source of all this trouble. But he also covers lots of good guys, and helps us understand economics better by tracing out where the good ideas came from, and why the bad ideas were wrong.

It’s course #17. Our members are downloading it like crazy. As our tagline says, it’s the history and economics they didn’t teach you.

Everyone, in his own interests, must thrust himself vigorously into the intellectual battle. No one can stand aside with unconcern: the interests of everyone hang on the result. Whether he chooses or not, every man is drawn into the great historical struggle, the decisive battle into which our epoch has plunged us.