By now you’ve probably heard of James Damore, that highly credentialed fellow at Google who was fired after writing a post (on an internal discussion board) critical of the cult of “diversity,” the dubious assumptions we’re all supposed to accept without question, and the relentless shaming and persecution of heretics who dissent.

People should be treated as individuals, he said, and not as members of herds.

I’ll probably discuss the issue on tomorrow’s episode of the Tom Woods Show (#972).

I had used the word “totalitarian” in reference to the situation at Google, though of course everyone understands that it’s the whole “diversity” regime, and not any one episode, that smacks of totalitarianism.

Outward conformity is expected without question. Nonsensical Orwellian slogans are to be repeated on command. Data of any kind is out of the question. Wondering about any of the basic claims (e.g., are employment and income discrepancies automatic proof of “discrimination”?) is enough to subject you to the liturgical rite of Shaming and Expiation.

So here’s a left-libertarian (of all people, right?) trying to defend a corporation’s hiring and firing policy, and my replies. Left-libertarians criticize the rest of us for being the lackeys of corporations, which also have power structures that need to be confronted, etc.

And here’s a left-libertarian saying, welp, if a corporation fired someone, that’s just the market speaking!

(Unfortunately, by the way, Twitter’s recent changes mean most people don’t see my replies to other people, which is why I’m sending this to you directly.) 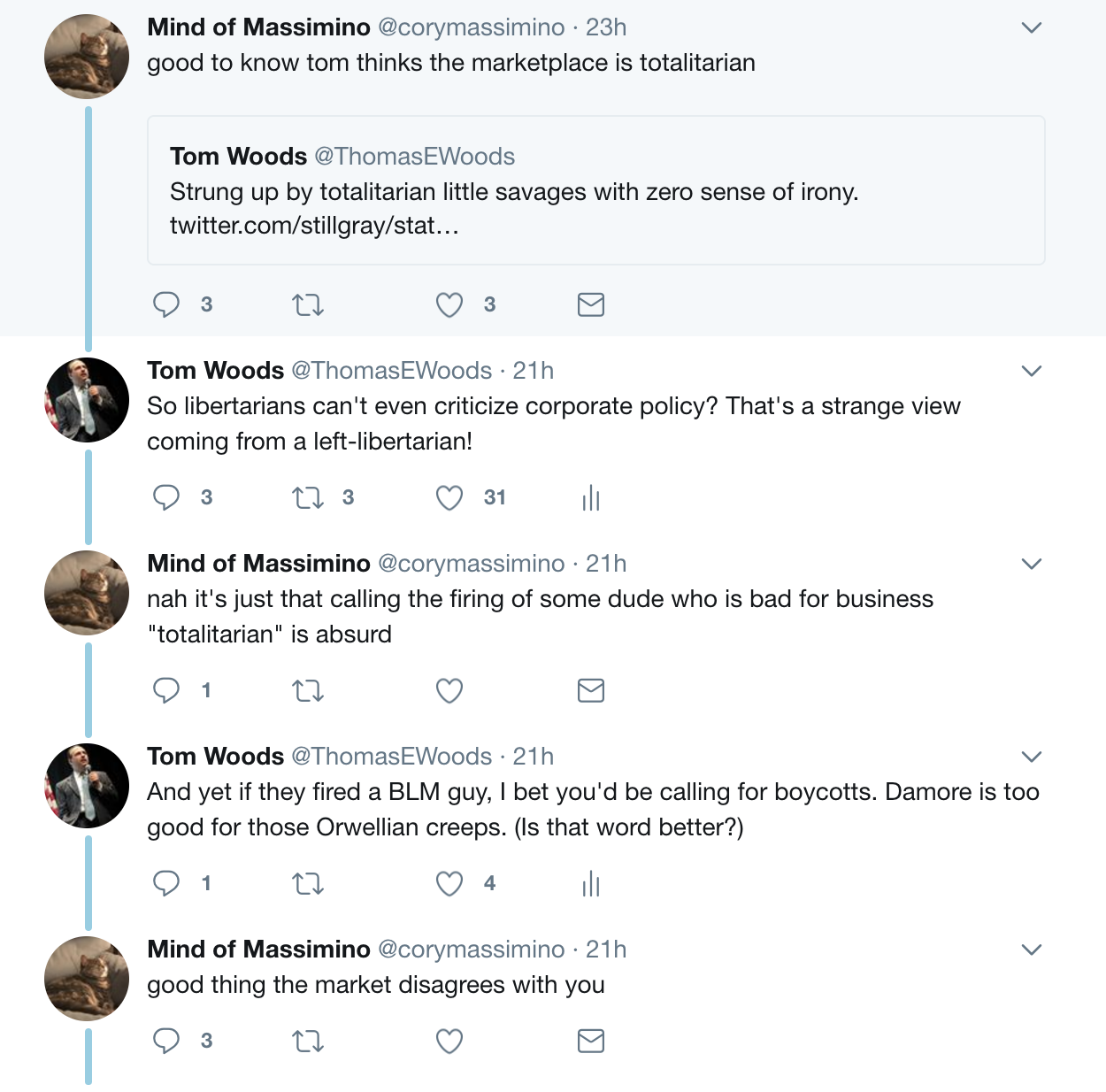 No reply to that.

Meanwhile, I wrote a post over at my entrepreneurship site about why cases like this should remind you to have some kind of side hustle you can shift into if this should ever happen to you.

Something to think about.

It’s that time of year again, homeschoolers. I strongly recommend the Ron Paul Curriculum, which we use — it’s self-taught, so you won’t have to run yourself ragged (or make lesson plans!) anymore.

Plus, only at my link do you get $160 in free bonuses when you join, so be sure to use it: